Twice I've enjoyed the privilege of teaching at UNC School of the Arts in Winston-Salem. The school is something of a hidden gem here in the triad, in that it offers five spectacular arts conservatories: Dance, Drama, Filmmaking, Music, and my department, Design & Production. The D&P program consists of concentrations such as costume design, scene painting, wig and makeup design, and many others, all "dedicated to rigorous professional training in modern stagecraft-- learning to build the future of entertainment". I, for one, am a believer. Moreover, I get to be a contributor to the artistic and professional journeys of the incredibly talented students that come through the department. 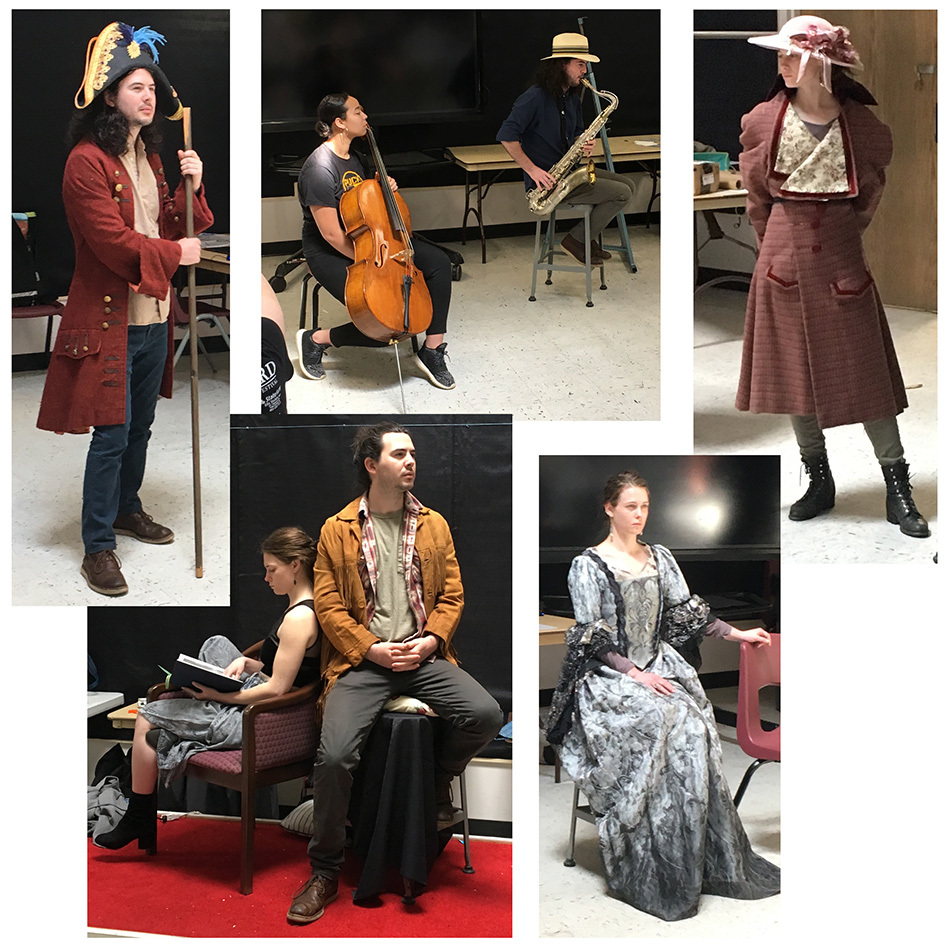 Having taught Life Drawing and it's sister course, Portraiture, I am acutely aware that both areas of study contain challenges that are healthy for any illustrator to revisit regularly. Teaching demands a great deal of one-on-one interaction (which I quite enjoy) but as such, doesn't allow much time to draw during class. So I still had to find ways to "walk the talk" which means drawing in "guerrilla attacks" (ie. short bursts between instruction with students), instructive demos, and in the solitude of my own studio while preparing for class. 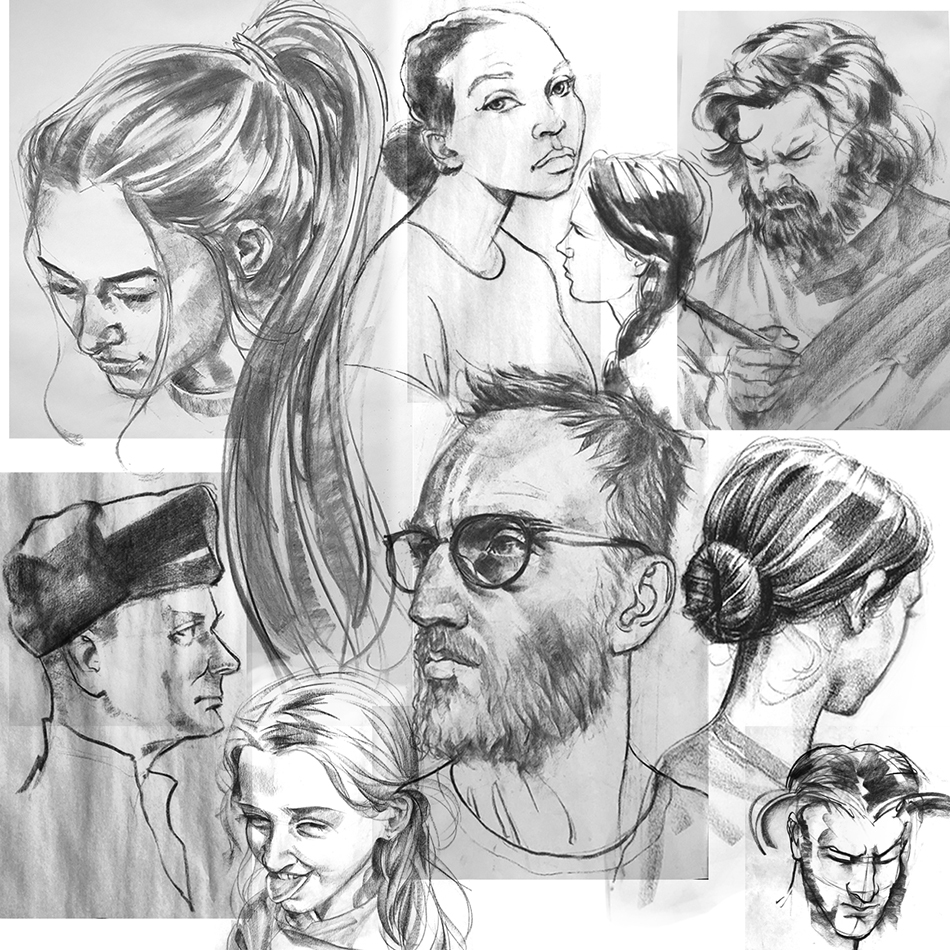 It wasn't until the final few weeks of the semester that it even occurred to me to "document" anything, as the true dynamic of the course is an existential one. (ie. the foundational principles upon which talent and practical skills are developed, while central, are not the real heart of the class, but rather the act of drawing and encountering the model, the materials, the medium-- engaging each exercise with a zeal and a willingness to stretch one's intuitive abilities; where drawing becomes as Degas said, "a way of seeing form". 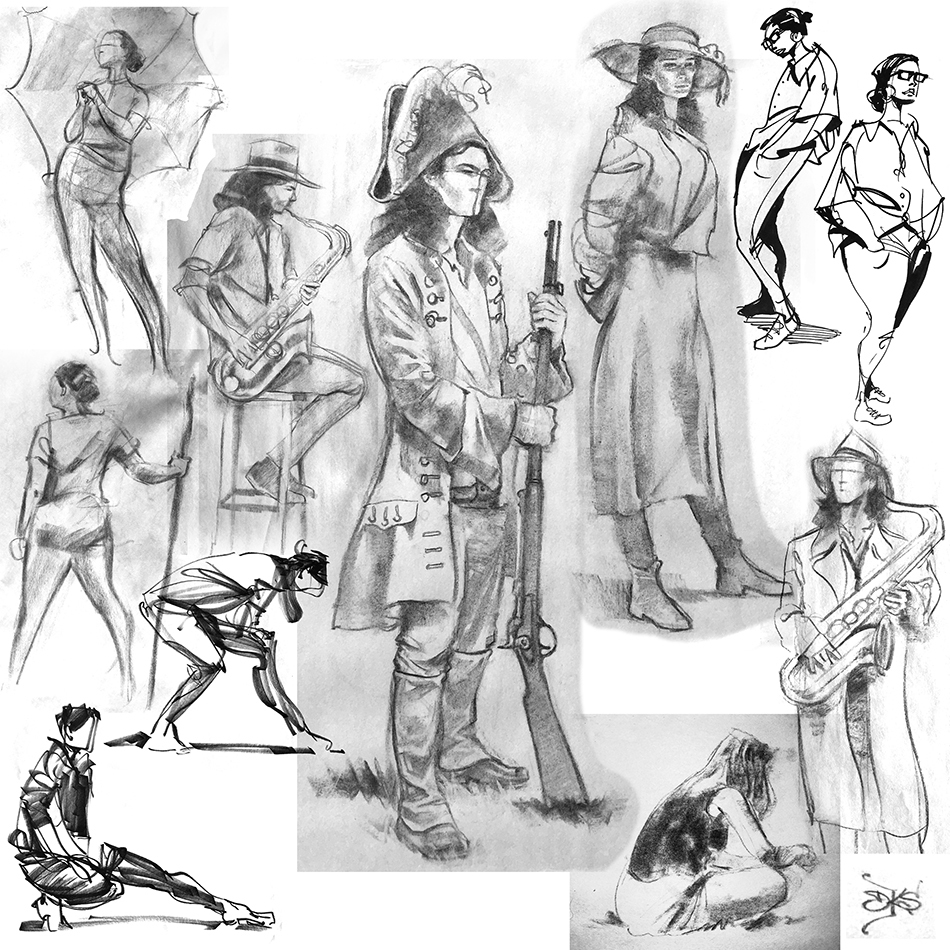 I am, however, an ardent believer in regular discipline. As writer and neuroscience expert Scott Halford champions, disciplined repetition is the only way to master a behavior, literally building new neural pathways in the brain, moving the "location" of that behavior or activity from the prefrontal cortex (executive function, new experiences and information--our "RAM") to the basal ganglia (permanent storage, habits and highly refined skills--our "internal hard drive"). (There's plenty of fascinating science behind this in Scott's book Be a Shortcut.) So in class we engaged in no shortage of regular exercises designed to reinforce good habits and impulses. 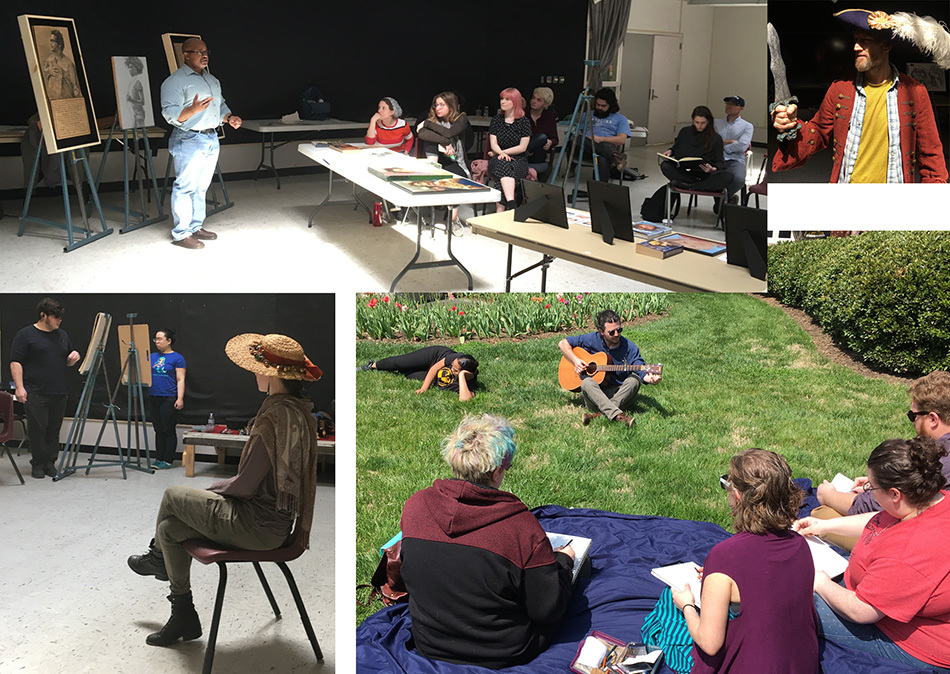 We drew live models, occasionally in costume or with props. We worked with poses ranging from one minute to two and a half hours. We spent time focused on specific facial features as well as the neck, hair, and hands. One day we sat around a table (with coffee) drawing each other and another day we took it outside. I had terrific models, one of whom, Daniel Brooks, brought his musical talents as well, serenading us with saxophone or guitar accompaniment to our drawing. 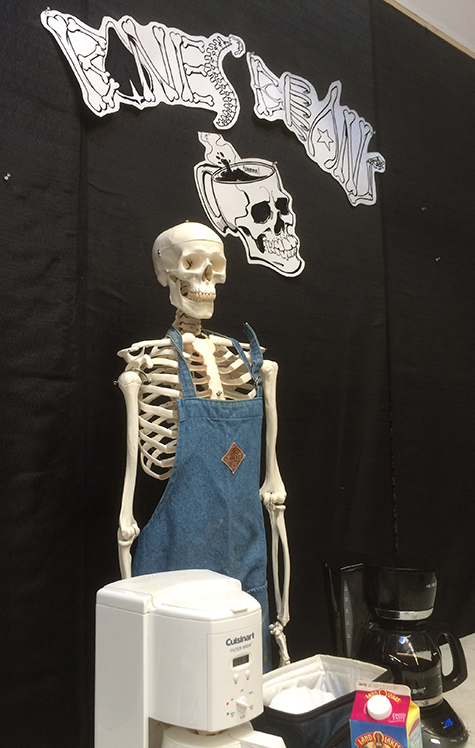 We were also treated to a presentation by two very good friends and respected colleagues David Gaadt and Steve Cozart, both teachers, illustrators, and fine artists. David and Steve shared original artwork they've created for assignments as well as personal projects with a high degree of cultural relevance.

After the massacre at Sandy Hook Elementary in 2012, David Gaadt felt moved to paint each of the victims as a memorial and gift to their families in Newtown. He drove the work up and delivered it himself. One brilliant and passionate artist's response to a reprehensible act and tragic event. Here are a couple of the responses he received from families:

"Dear Mr. Gaadt: Your talent and your caring spirit shines through this lovely portrait. We will cherish this painting for years to come."

"Dear David: We are so grateful for your thoughtfulness and prayers during this difficult time. The fact that you would share your gift and capture (our daughter's) beauty on canvas is humbling." 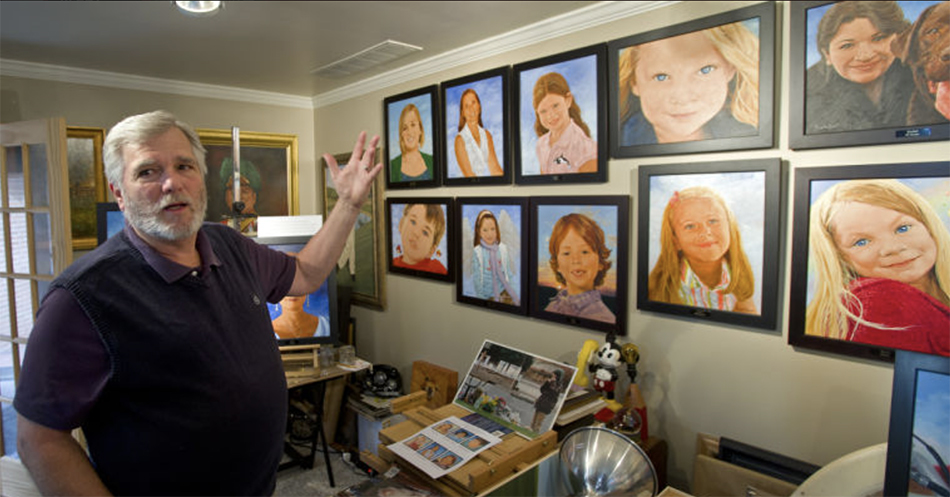 Steve Cozart created a body of work meant to spark conversation about "classism and stereotyping by African Americans toward one another based on factors such as skin tone and hair texture, etc." For his Pass/Fail Series, Steve created portraits of people he interviewed-- fellow African Americans of various backgrounds and ages, combining text (his subjects' remarks regarding their personal experiences with discrimination based on their color/skin tone) --and imagery--on paper bags (the bags being a cultural litmus test around skin tone within the African American community) with the ultimate goal of "creating greater understanding and even hopefully eradicating such preconceptions." One artist speaking with a voice of humility, clarity, and beauty into a sensitive and multifaceted issue. 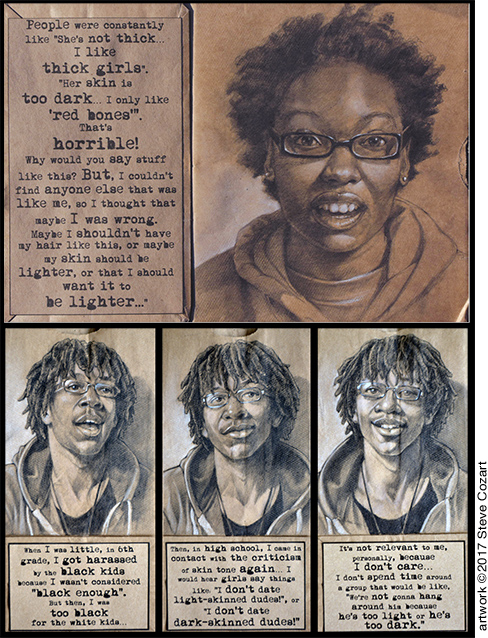 As a result of numerous requests, near the close of our semester we briefly explored expression, stylization, and caricature. Perhaps to some, a spark that will inspire something unforseen in the circuitous journey that is a career path. For one demo I discovered a useful resource in Steve Silver's Posebook app. Excellent poses, lighting, and angles. We only spent a day on these topics as there is so much to cover in the inexhaustible exploration of the human face and figure. But as with any endeavor, as students learn to sharpen their observation skills and their imaginations while honing their technical acumen, they will emerge equipped to take on whatever creative and professional challenges the world throws at them! 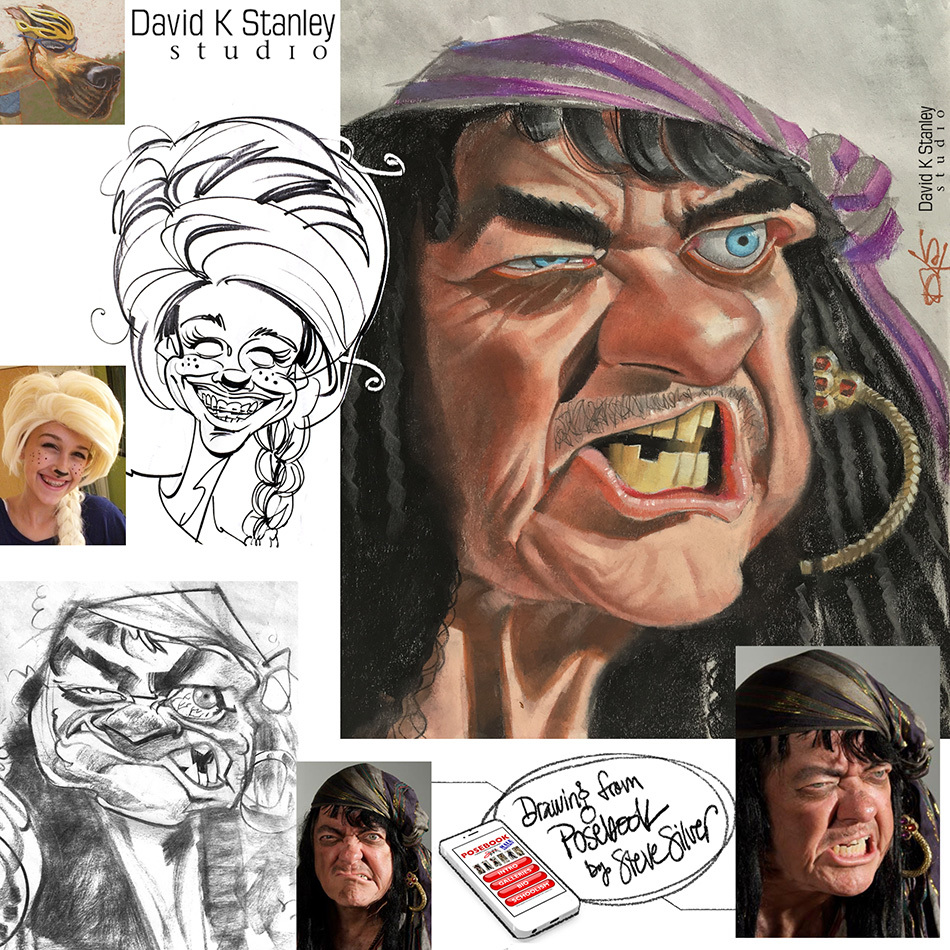